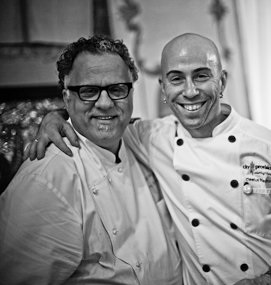 The Original Heaven on Seven on Wabash, the authentic, critically acclaimed Cajun restaurant of chef/owner Jimmy Bannos, is excited to announce the launch of its “Family Tree” dinner series on Wednesday, June 22. Highlighting previous employees of Heaven on Seven who have gone on to achieve amazing things in the food and beverage industry and grew the Heaven on Seven Family Tree.

“I love seeing these success stories,” says Jimmy Bannos. “Kids who started working for me waiting tables or cooking on the line are now chefs or owners of restaurants; food and beverage reps or somehow making this industry better. I am excited about this series because it gives me the opportunity to team up with people I haven’t worked with in years and learn from each other!”

For the first installment, chef Jimmy Bannos will cook with chef Cleetus Friedman of Caffé Baci for one of his famous Hot as a Mutha dinners. The two well-known, talented Chicago chefs will create a six-course meal featuring hot & spicy dishes only the brave can handle.

“I am really excited about getting back in the kitchen with Jimmy,” says Chef Friedman. “I learned so much from him and I always appreciated that he would let me helm the kitchen for special events, especially Hot as a Mutha. It will be really fun going back to my roots for this dinner and hang out with Jimmy in the kitchen like old times.”

Chef Friedman worked at Heaven on Seven as a server and later ran its catering program before he opened his own company, City Provisions, a sustainable-focused catering company and delicatessen, in 2008. Cleetus became the executive chef at Fountainhead in 2013 and recently took over as chef for Caffé Baci’s full service catering and special events division and creative chef for the restaurant group’s four downtown locations. He also launched his own line of chef driven condiments, sauces, sausages and salami called Crafted by Cleetus. Chef Friedman has been a staple in the local restaurant scene, leading the way in Chicago’s sustainable movement in the food industry.

“Cleetus has always been an extremely hard-working, talented and goal oriented young man. He surpassed all my expectations of him,” says chef Bannos. “Whether he was working as a server or as Heaven on Seven’s catering director, he gave it 100%.”

While Bannos and Friedman have worked together throughout the years, this will be the first official collaboration between the two well-known Chicago chefs.

“Jimmy has always been a mentor to me and he played a major role in my career,” says Friedman. “One of the biggest things I learned from him was that each time he entered or left the restaurant, he would say hello and goodbye to everyone who worked for him—from the host staff to the dish staff and everyone in between. He always made his place like a home and we felt like a family working there. But that’s Jimmy for you—a family man through and through.”

The Hot as a Mutha dinner with special guest chef Cleetus Friedman will take place on Wednesday, June 22 at 7 p.m. at the Original Heaven on Seven on Wabash at 111 N. Wabash, 7th floor. Tickets will be $60 including tax and gratuity and include a six-course meal. Drinks available for purchase separately (CASH ONLY). Tickets available here.