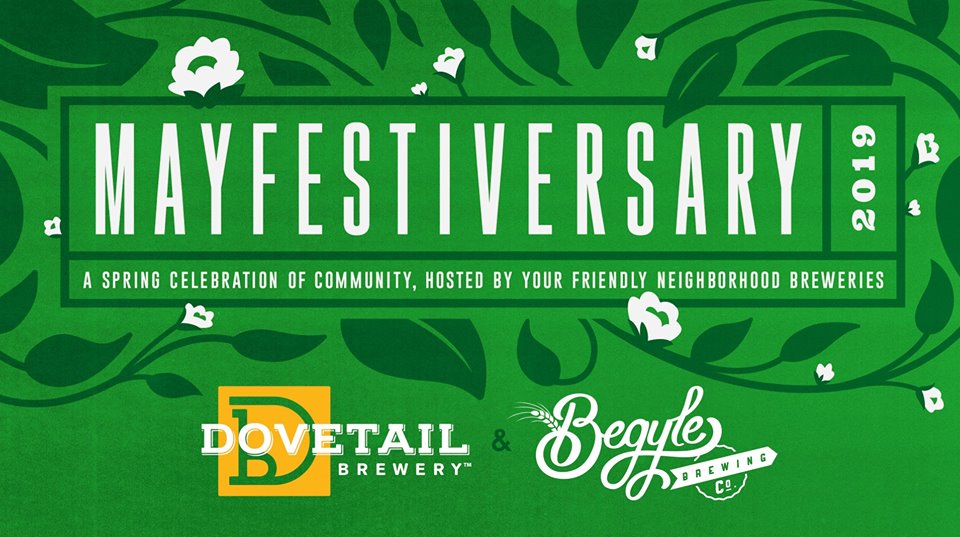 This Memorial Day weekend, the friendly neighborhood breweries, Dovetail Brewery and Begyle Brewing are at it again and are excited to join forces and celebrate spring, the neighborhood, good food, music, and beer during the third annual Mayfestiversary. This Ravenswood block party also marks Dovetail’s third birthday and the fourth anniversary of Begyle’s taproom!

This two-day festival will boast more than a dozen locally brewed beers, varied cuisine from some of the finest food trucks in the city, live music and activities for adults, children, and dogs of all ages! Live music will be the center of the festival. In addition to outdoor seating and beer options, both taprooms will be open and serving beer to festival-goers.

Begyle and Dovetail will both have special tappings exclusively for the festival and there will be multiple locations throughout the festival to grab a brew, including the taprooms, an outdoor beer trailer, and Begyle’s garage.

New this year, Dovetail will host a series of short talks and guided tastings in the Barrel Loft lead by co-owners and Master Brewers Hagen Dost and Bill Wesselink, and Advanced Cicerones Jenny Pfafflin and Shana Solarte. Talks are free and open to the public, and are open on a first-come, first-serve basis. A full schedule will be available at dovetailbrewery.com, and posted around the festival.

Begyle will feature family activities in its upstairs event space, including a kid’s coloring activity art wall, cornhole, and skee-ball. There will also be a roaming balloon artist creating balloon art on both days.

In addition to the exciting activities, live music, food trucks, and delicious beer, festival goers will also get to peruse vendors like Amy’s Candy Bar. Waste Not will be collecting compostable items and the festival will have compostable cups!

The fest is located right off the Irving Park Brown Line and will be held in the Ravenswood corridor between West Belle Plaine and West Cuyler Ave. The fest is free, with a $5 suggested donation to benefit The Friendship Center.

Visit the Facebook event page for more information about the fest and details like the music lineup, food trucks, Dovetail’s beer talks, and kids’ activities.